Apáca, Villa Monachalis, Geist, Gist, Apaţa. Village located at 35 km north of Brașov, in Perșani Mountains, on the left bank of Olt river. In 1850, out of 1583 inhabitants, 1379 were Hungarian; 133 Romanian and12 German. In 2002, out of 2995 inhabitants, 1625 are Romanian, 1220 Hungarian, 146 Rroma and 2 German. Two famous personalities, Apáczai Csere János and Bartalis János, were born here and the ritual of rooster shooting continues also in the present in the village.

Heavy clouds appeared over the mountains, thick black clouds. Due to the rain, which was pouring for a few days, not even the peak of the smallest hill was seen. The dawn came with a grey swirly smoke. The village was burning slowly. Under Szőlőponk[1], the Tartars were preparing to leave. They didn’t rob much. They didn’t find people, animals around, not even treasures. Everyone hid somewhere with its riches. Nothing could be found, it was time to move on. They were gathering the tents, carrying the heavy chests, preparing the horses and then – in the dim light of the dawn, which came through the thick clouds – the rooster sang. Its piercing sound split the darkness again and again. It came from the rushes. Stand to! – sounded the order and the redoubtable army set out to the hiding place. Only when they got closer, the Black Fortress[2] appeared from the shadow, hiding in the bush. The rooster’s betrayal was followed by a wild siege and bloodshed and only a few inhabitants of the village survived. The siege ended heavily, slowly and the numerous army moved also further from Apața. The ruins full of smoke were washed by the rain which poured persistently and above the fortress, at Hegyparag, those who survived tied the traitorous rooster to a fork and executed it.

The first written mention of the village dates from 1460, when King Matei Corvina donated the establishment belonging to Bran area to the noblemen from Sfântu Gheorghe and Belin.

However, according to Szeli József’s chronicle[3] from Țara Bârsei, King Louis I of Hungary founded Apața at that time, when he ordered the installation of Szekler border guards in Seven Villages, near Brașov. It was assumed that the Szekler border guards were those who built the first palisade of wooden beams on the swampy territory of Olt, consolidated later, in the 15th – 16th centuries, with rocks, when the Turkish attacks became more and more frequent in the bays of the Southern Carpathians.

The Latin and Hungarian name of the village univocally makes mention of the monastery of nuns here. According to Orbán Balázs’s writing “North of the dungeon described here, between the forests of Apața there is a valley called Remetea; 30 years ago, on the first mountain on the left side of the mouth of this valley, one could still see the foundation of an impressive construction, which was removed, moved and reused by people; according to tradition, a hermit with saint life built a small building, which also gave the name of the valley. In the place of the building erected by the hermit, a big church and a monastery were built later, where the knight monks who fought in Jerusalem lived.”

If this is true, the monastery formerly belonged to the order of knighthood.

Data about the church date back to 1427,the Catholic worshipers from the Middle Ages became all Lutherans due to the influence of the church reform from Brașov.

At Szapolyai János’s order, the canon priest from Alba Iulia, Háportoni Forró Mátyás and his brothers were invested in 1531 in Apața area. In the 17th century, the village was decimated many times by pest epidemics.

The great pedagogue of Transylvania, the pioneer of local culture, science and education, Apáczai Csere János, was born on June 10th 1625. After the summer of 1653, he returned with the culture assimilated in the Netherlands and with Magyar Encyclopedia [Hungarian Encyclopedia], in order to be a professor at Alba Iulia, his home village being burned by the Tartars on August 21st 1658. Faith also brought Csere János in Apața. His fiery activity of overwhelming intensity was interrupted at 34 years by a pulmonary disease, in the New Year’s Eve from 1659, ending his material life. Today, the memorial board is placed on the house standing in the place of his home: “Never quit hold of the science weapon –In the place of this house was Apáczai Csere János’s home (1625–1659). It was placed in 2000 by the memorial community from Apața, at the anniversary of 375 years from his birth.” In the church yard, the traditional house commemorates Apáczai and in the Educational Center across the way, the permanent exhibition hosts the artistic works about the great humanist.

After the Black Fortress from Apața was restored for the last time, Orbán Balázs was still able to read the notes: “On the North-Eastern side one can read: «Soli Deo Laus et Gloria.[4]» On the Eastern highest side, there is a note from 1658 and under it Hoc opus fieri fecerunt cementarii cigraenses Jakobus Sombori, Georgan Török, Petrus Szabó. Below «Fidesed cui vide[5]» and other moralist sentences of this type.On the South-Eastern side there is this important inscription: «Tempore Judicis Apa (Apaciensis) Joannis Gáspárcives Valentinus Kiis, Georg. Czere, Stef. Kispál, Joan. László Rec. tor. Sch. Martinus p. Csern. Apafalvi.» GONDVISELŐ SZABÓ PÉTER, BIRÓ JÁNOS. […] A fresco painting is also found on this side, which represents a man with his head upside down and a pitcher, which symbolizes that courage of the craftsman builder to empty the glass of fortune and drink treat hanging on the roof, action also carried out by several brave builders of towers.”

There are not any data about the destruction of the water castle[6], after it was no longer a military objective, its remains being used for building houses. The only defense building which can be seen in the present are the remains of the bastion for old Italian cannons, under the form of a regular pentagon, which appears in many writings as a tower[7] (45.9588° N; 25.5357° E; 470 m).

The old church, together with the village was burned up in 1794. In 1804, a new church was built (45.9524° N; 25.5307° E; 482 m), keeping the old protection wall, the corridor in front of the crenels being demolished. The tall plastered wall of approximately 2.5 m surrounding the church is consolidated with abutments. The existence of a consolidated church at Apața in the past is also proved by the fact that the church tower was made of a bastion, so that it is not an integral part of the church.

The poet and church curator Bartalis János was born on July 29th 1893.

The first Hungarian practitioner of free poetry studied in Satulung, at Cluj and Budapest. He became a famous poet after his recognition as Helikon member so that not later, on December 18th1976, he was buried not far from Apáczai’s grave, in the central cemetery Házsongárd.

In the center of Apața village, in the school park, near the church, two monuments commemorate the two famous natives of the place. A statue is placed for Apáczai and a sculpted wood funeral pillar and a marble board for Bartalis (45.9527° N; 25.5310° E; 487 m). According to tradition, after the church service, the group who shoots the rooster presents its honors for the second time, on Easter Sunday.

Every year, in the first week of the Lent, the boys who are to be confirmed choose six of them. Their leader is the first boy and the tallest is the gipsy priest. Rooster shooting is done under the supervision of the other four.

For the group, for the brave ones of 6-12 years, many weekly repetitions are held, being supervised by their fathers with the books in their hands.

On Easter Sunday, after the service, the group of children starts from the house of the first boy. They wear black pants, red vest, with a sword at their waist, a moustache is painted on their faces. The brave ones march in black vests and green hats, wearing a crossbow on their shoulders. The group is led by the orchestra of blowers, then the boys who confirmed (became members with rights of the church) this year and became men, wearing above the head a painted board with the rooster in the middle, as a target. The girls dressed in traditional clothes march singing on the main road of the village. The group presents its honors with their heads bowed in front of the church and school, then, if the weather is good, they go to the village border, at Hegyparag and in case of rain, to the community center, where the ceremony starts.

The six boys form the panel, two are the accusers and one defends the traitorous rooster, the fourth one gives the death sentence, the fifth one says his last words and the gipsy priest sings the funeral speech using rhymes. Afterwards, each boy shoots the rooster painted on the target board three times with the crossbow. After killing the rooster, a huge feast is organized, which is continued in the evening with a ball.

Orbán Balázs did not write down the tradition of rooster shooting from Apața, it probably did not exist yet in the 19th century, however he described in detail the tradition of beating the rooster from Seven Villages. This tradition was also very common for the Transylvanian Saxons of Burzenland. At the beginning of the ‘70s, the school principal, Zsizsik Jenő, started to revive this tradition, so that it already appears a live tradition in the records of Seres András[8]. Thus, the homage by bending the head forward in front of the school is also addressed to Zsizsik Jenő.

The evangelical cemetery with sculpted wood funeral pillars is unique in Transylvania – even nowadays, such funeral monuments are placed on graves.

Apața is worth to be visited with the occasion of burying the farșang (the period from the Epiphany to the beginning of the Lent) or on Easter Sunday, in order to see the ritual of rooster shooting, celebration with a serious reputation in the present, to admire the famous decorated eggs. Those who are willing to make trips can see the limestone cave Bârlogul Ursului[9] (Bear’s den), a labyrinth route of around 400 m, (45.9900° N; 25.4706° E; 726 m), Apáczai Csere János cave, located in Nagy­kő­patak valley, discovered in 1974 and called Hiúzlik, not being accessible because it was blocked up along the time. Those who want to explore more, Ürmösi Tepén[10]and Rákosi Tepén[11] fortresses can be found on Piatra lui Mihai [Mihálykő] (Michael’s Stone), pre-historical and medieval sacrifice places or can visit the extinct famous volcano from Racoș[12], the basalt columns and Lacul de Smarald[13] (The Emerald Lake). From Apața, passing the bridge over Olt, Burzenland ends and Szeklerland begins.

[1] Ponk: mound, the tallest hill on top of the mountain noun [Geogr.]. Once, the village was found in the place called Szőlőponk.

[2] Similar to the Fortress from Codlea, the fortress from Apața was called the Black Fortress.

[4] Praise and glorify only God.

[5] Believe but look carefully in whom! 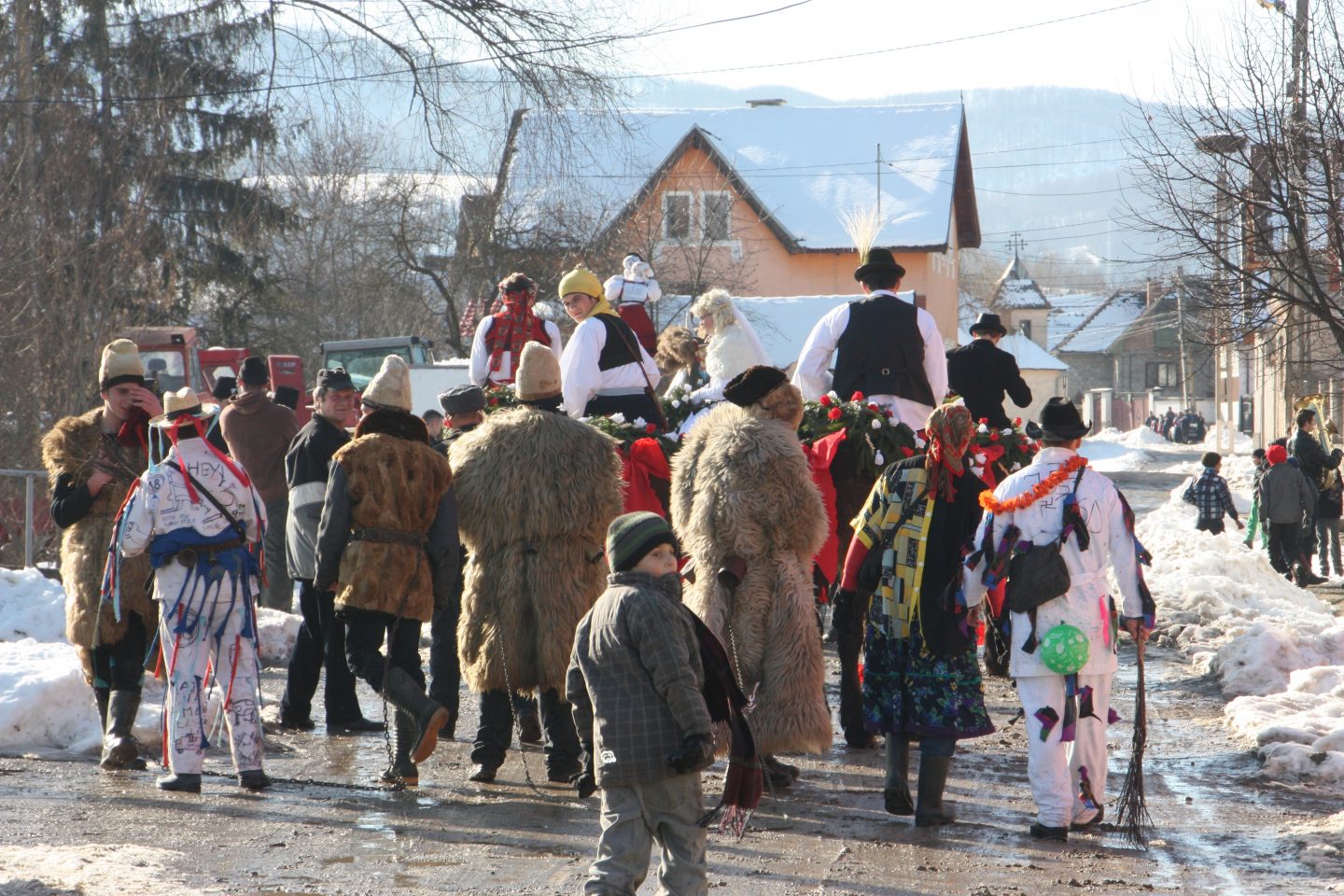 It is worth visiting Apața at the end of the Carnival period and take part at the "funeral" ceremon...